Why Am I Not Considered “Black” All of a Sudden? 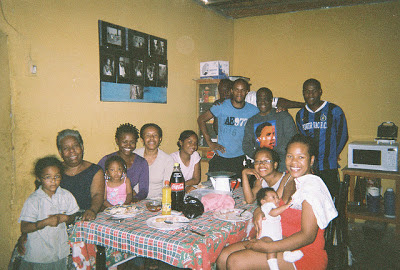 I'm in the back (2nd from right) with members of a Black
family in El Carmen, Perú, the hub of Afro-Peruvian culture

My Spanish is far from perfect, but apparently good enough to make some Latin-American people think that I too might be Latin-American. When I was in Perú, for example, I got into a conversation with an Afro-Peruvian who thought that I was from his home state (province) because of a t-shirt that I was wearing. When he picked up on my foreign accent, he just assumed that I was from another Spanish speaking country, perhaps Panamá. He was so surprised when I told him that I'm African American.

Many Latinos living here in the US question me in Spanish as to whether I'm Puerto Rican or Cuban as my Spanish speaking accent has a Caribbean flavor. In fact, a Puerto Rican whom I met recently actually thought that I was Puerto Rican. When I say that I'm an American, they then ask where I was born, still trying to probe for Latin-American roots. I tell them St. Louis, MO. Then they ask where are my parents from. I tell them Florida and Missouri, LOL. Finally, they give up and realize that I'm really American born and raised, and that I just happened to be exposed to the Spanish language, and salsa music during my New York City upbringing. .

However, one day I came to work, and an African-American co-worker asked me to clarify my ethnicity. She wanted to know where I'm originally from because a couple of Latino co-workers who heard me speak Spanish told her that I am not “Black.” The two Latinos, a male and female who made this statement, burst out laughing when I explained to my African-American co-worker that Latin-Americans come in all colors. The female (Latina) asked me sarcastically, red and blue too? How is it that my skin color automatically changes just because I can rattle off some Spanish?