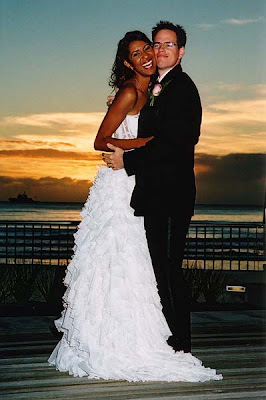 My father, an African-American, was happy in his second marriage to an Italian-American woman till death did them part. I strongly feel that when you are in love, you are in love. Having common interests and basic similarities in character are also a big help in keeping a marriage together. Such was the case with my father and his wife. However, what I tend to question in so many other interracial marriages is the motive. Is it love or is there something else going on?


In many Latin American countries blanquemiento (whitening) and mejorar la raza (improving the race) are accomplished by having children through interracial marriage. People believe this is the best way to combat racism. It shocked me to learn that many Afro-Latino parents encourage their children to avoid black mates when they come of age. "Think about the children," they would say.

When I was in Ecuador, I hung out with Gloria, an Afro-Ecuadorian woman whom I met through a Facebook friend. She herself was married to a white man and two of her children are married to Europeans. Thus, the skin color of Gloria's grandchildren blend right in with the rest of the Ecuadorian population who hold the better jobs and/or are accepted into universities.

I feel that it's one thing to marry because you love someone, but I cannot understand spending the rest of one's life with someone solely based on skin color. Personally, I prefer a darker woman, and I make that plain when I'm around Afro-Latinos just to make a statement. But, if were to meet a woman of a different color with whom I have a lot in common and to whom I'm truly attracted, I will certainly be open to matrimony.
Posted by W Bill Smith at 3:02 PM