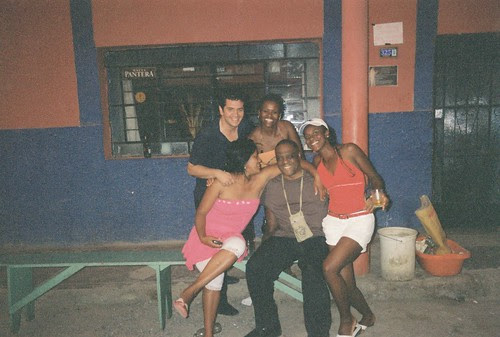 I'm outside the home where I was staying in Perú chatting with friends. The only thing wrong in this picture is my passport holder being visible around my neck.
~
While in El Carmen, Perú, and Afro-Peruvian dancer and instructor asked about my motive for hanging out in a poor, non-touristy area when most visitors stay in nice hotels and go to tourist attractions like Macchu Pichu, Nazca Lines, and Lake Titicaca. My response was número uno (#1), to improve my level of Spanish fluency by living amongst ordinary, every day people. Número dos (#2), to learn more about the black experience, history and culture in Perú as my hobby is exploring black heritage in Latin American countries.

Dressing down is important because you don't want to be marked as a tourist; it invites robbers, pickpockets, and cheats, especially when traveling alone.


I avoid major hotels and tourist attractions with a couple of exceptions. In one instance, I veered into the Lima Hilton Hotel to eat breakfast because I could not find a restaurant open at 7:00 in the morning in the part of town where I happened to be spending the night while on my way to Ecuador. In Ecuador, I had to visit La Mitad del Mundo (the middle of the world) on the equator. I wanted to get my picture taken with one foot in the northern hemisphere and the other in the southern. It was there where I bought a Panama hat for $22.00 ($160 in the US). I also bought some nice warm, stylish looking sweaters. The equator in Ecuador is chilly being that it is up in the Andes Mountains. 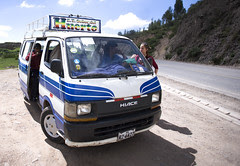 To get around in Perúvian cities, I catch a combi as much as possible.


In Cuba, I didn't have much of a choice. I was traveling with a special group and was given a guided bicycle tour of Havana's famous sites such as Revolutionary Square (La Plaza de la Revolución. The good part was I got to stay with a family in a non-touristy area of Havana, where I made it my business to immerse myself in the community and spend as little time with other tourists as possible. I choose to live like a local, staying with families whenever possible, riding public transportation, or renting a hotel in the barrio (the ‘hood). Most of my time was spent among the so-called lower class. Therefore, I dressed down (no bling bling) to try to fit in.

Dressing down is important because you don't want to be marked as a tourist; it invites robbers, pickpockets, and cheats, especially when traveling alone. On two occasions I ventured into one of Lima's roughest neighborhoods La Victoria where Perú's famous soccer team Alianza Lima have their stadium. What did I do? I went into the area wearing an Alianza Lima team jersey. Thus instead of being harassed, I was cheered. People shook my hand because they were fans. People drove by honking their horns and giving me the thumbs up shouting "ALIANZA LIMA-A-A-A-A-A-A-A! I wonder if they thought I was one of the players. After all, I fit the profile--black and athletic :-) 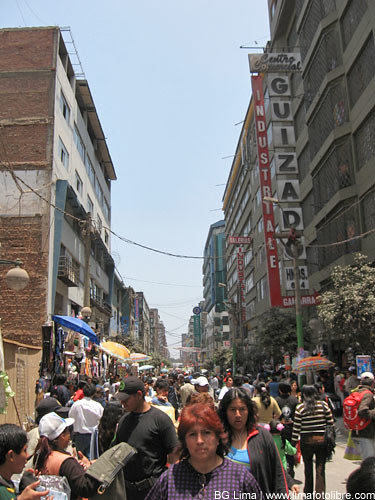 The La Victoria section of Lima, Perú is the rough part of town.

As a traveler in Latin America, I endure a standard of living that would “annoy” the average tourist. As a result, I had more spending money to enjoy myself and at the same time, to help others who were much less fortunate than the average American family living below the poverty line. It was a total joy, a heartfelt pleasure, and worth every penny to see how they were enjoying my company and my treats. I achieved my goal of making lifetime friends, learning the cultures, but most importantly, improving my Spanish.
Posted by W Bill Smith at 12:07 PM