A funny thing happened while riding the bus from Quito, Ecuador's capital to Valle de Chota, a black community of 2000 people in the Andes Mountains. As I made my way towards the back to use the restroom, I struck up a conversation with one of the many black passengers who was wearing a New York Yankees baseball cap. Being a native New Yorker myself, I had to ask if he knew what he was wearing. I asked because it has been my experience from traveling to different countries that people will wear hats and t-shirts with English writing with no clue to its meaning. 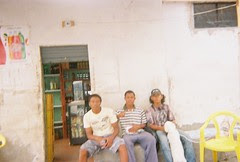 These young brothas of Chota Valley gave me
the scoop on their peaceful little hood.

For example, when I was in Cuba, I saw a woman walking along the beach wearing a New York Knicks jersey. Out of excitement, I shouted to her ¡Ay ¡es mi equipo (Hey, that's my team)! She looked at me as if she were asking, what are you talking about? Well, it turned out that she didn't know what she was wearing. Similarly, a lot of African-Americans wear African garments with no clue as to the specific tribal or cultural meaning behind the color and design-patterns of such garments.

This young man knew what he was wearing, and he pronounced “New York” well. As our conversation continued, everyone in the rear section of the bus noticed my funny accent. My Spanish is obviously not Ecuadorian, least of all, “Afro” Ecuadorian. They really paid close attention when a non-black woman who guessed that I am an American asked me a question in English. When I responded in English, all the blacks roared with laughter. It was like they never heard a black guy speak English before. 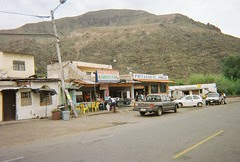 Immediately, my mind went back to the U.S.where Americans, even Latinos (who really should know better), are not used to blacks speaking Spanish. I myself have seen Latino (and African-American) people chuckle or go into shock when they hear me make statements or ask questions in clearly understood Spanish. Others look at me in utter astonishment as though I'm supposed to be limited to English and Ebonics. I'm wondering if the Afro-Ecuadorians on that bus feel that blacks should limited to Spanish only, or perhaps the Afro-Ecuadorian dialect. Hmmmmmmmmmmm!


A Humorous Encounter with Afro-Ecuadorians


Afro-Ecuadorian Poetry
Posted by W Bill Smith at 11:58 AM