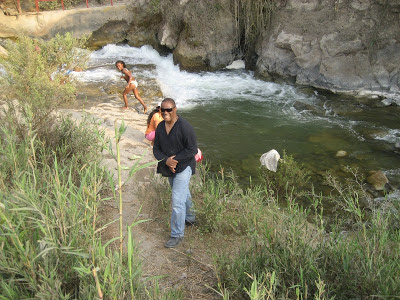 In The District of El Carmen in Chincha, Perú, December 2011

I don't believe in New Years' resolutions because if I feel I need to make significant changes in my life, I prefer to do it in the moment, and not wait until January. It's been years since I made a New Years' resolution and that resolution was to acquire a better command of the Spanish language. It worked out to the point where I not only developed a better command, I had bilingual jobs, one of which I received bilingual pay. My Spanish played a large role in my being hired by my last company as I worked with many Spanish-speaking immigrants. In the last few years, I've traveled to Spanish-speaking countries as part of my language training, and when visiting those countries, I make it a point to go places where gringos generally don't go.

It just so happened that I missed out on my annual trip to Perú, my home away from home, and other Latin American countries that I usually include with my trip to Perú where I have have strong family-like connections. Usually, when I fly to Perú, I take advantage of long layovers on the way down or on the way back, and include even another country nearby, like Ecuador, Colombia, or Panama.

However, this year I did not get to travel because I lost my job in February 2012, just two months after my last South American trip to Perú and Venezuela. Fortunately, I got picked up by a résumé-writing company, but it doesn't offer 30 days vacation like my last job. Yet, I made it a plan to take a trip before the end of 2013, and this is not a New Years' resolution. Simply an ongoing plan for language and cultural exposure for this is a big part of my life.
Posted by W Bill Smith at 12:00 AM