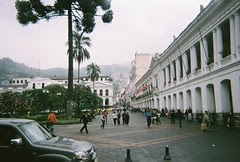 As a traveler (not a tourist), I prefer to stay away from tourist attractions and be among the everyday people of the places I visit. This, in my opinion, is the best way to experience the real culture; particularly if you want to master the language. In my case, the language is Spanish.

One thing I love about Facebook is the people I meet who can help make my travels more enjoyable. It was on my separate Spanish Facebook account where I met Alexandra, an Afro-Ecuadorian woman who lives in Germany with her husband and two children. Alexandra noticed a Facebook update expressing my desire to visit Ecuador being that I'm a fan of Ecuador's soccer team, which made an impressive showing in the 2006 World Cup Games. 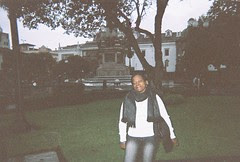 Gloria of Quito Ecuador
After a few months of conversation and trust-building, she introduced me to her mother Gloria who invited me to her home, showed me around Quito, Ecuador and took me the equator where I had my photo taken with one foot in the northern hemisphere and the other foot in the southern hemisphere (photo below). It was Gloria who introduced me to the panama hat of which I received so many compliments upon my return to the USA, I bought four more panama hats of different styles on my next trip to Ecuador. 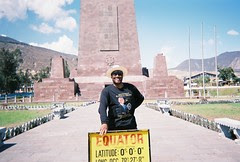 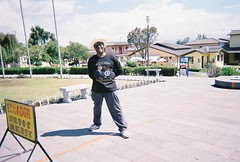